Wood work in churches and liturgical worship spaces has always been a mainstay within the liturgical environment. Over the years, we have been proud to use the services of an excellent cabinetmaker, who uses the Old World techniques of lock mitred and dove tail construction and who is capable of reworking existing pieces so as to adapt to more current liturgical spaces. St. Jude Liturgical Arts Studio uses fine woods such as oak, walnut, and cherry, as well as hand-rubbed stains to provide unique finishes and designs. Whether your needs are for sanctuary furniture or to match an existing high Gothic kneeler, we are able to answer any and all of your requests.

Under the direction of Rev. Michael Murphy, a Baptismal area, which was no longer being used for that purpose, was transformed into a devotional prayer chapel.

Several renderings were submitted for Father, and after his input, this devotional area was created. Wood carved sculptures of the saints were completed for the room. Electronic votive stands eliminated the work and worry of having to use real candles in a confined space. 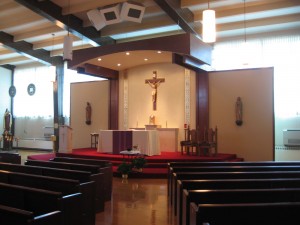 The Church of Saint Therese of the Child Jesus after our Studio completed the renovation process.

We are happy to showcase one of our favorite projects here. When Father Stephen Thorne, pastor of Saint Therese Church in Mt. Airy, called our Liturgical Arts Studio he expressed some of the same concerns we hear from pastors and parish councils often. These concerns raise one important question: Can we renovate our church, creating a more beautiful space, while respecting our congregation by keeping a minimal budget? The answer: Yes…and we can help.

St. Jude Liturgical Arts Studio is first and foremost a ministry of service for us. On our case studies page you will see examples of work we have completed in Cathedrals, The National Basilica, and even work for the Holy Father…this does not mean that our expertise is only available to those with large budgets. In fact we are able to work with just about any budget. We stand by our reputation and that means that you will receive the same attention and skill from our team no matter what your needs demand.

In this project we began with budget in mind then provided the pastor with options, drawings, and full-color renderings which focused on important elements of the sanctuary: The Blessed Sacrament and the Crucifix.

After our plans were approved, we went to work in creating a beautiful new sanctuary for a dynamic parish.

Take a close look at the photos below. It’s clear to see that we used the budget wisely. First we replaced the tabernacle and placed above it a new carved crucifix that is simply stunning. We made use of the existing side statues and chairs and enhanced the canopy by creating faux columns and adding height to the center part of the sanctuary wall. The columns cause the eye to focus more on the area of the altar of sacrifice. We then called on the skill of our team of artists to add beauty to the area with a gold painting technique which speaks for itself. Our artists also used a paint technique to enhance the crucifix.

Maybe you didn’t notice…take a closer look! Using a fair bit of artistry and some gold leafing we were able to once again stretch our budget by giving an affordable piece the dimension and presence of a much more costly element. 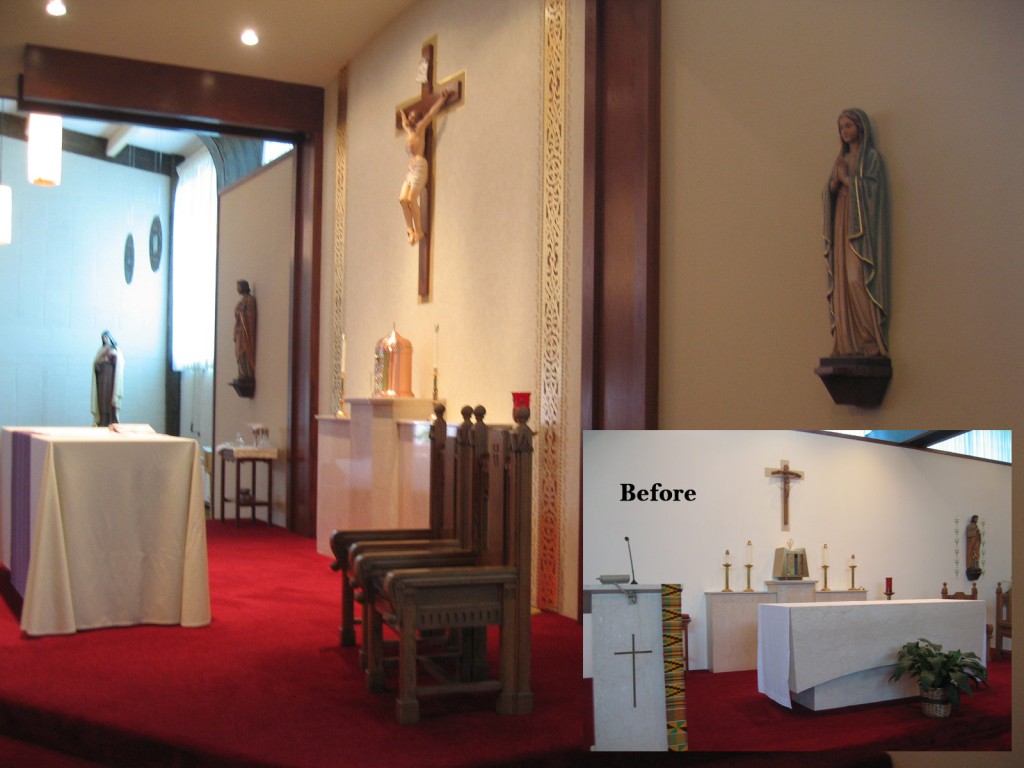 By giving the sanctuary a more elegant background color and an altar cloth and bronze appointments that enhance the design, we believe we have created a worship space on a budget that didn’t place a burden on the parish community. Give us the opportunity to uncover the hidden beauty of your church and you will see how budget never affects God’s glory! 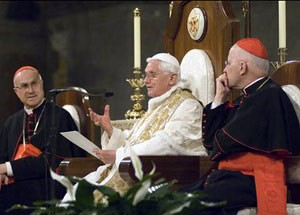 Papal Chair – Basilica of the National Shrine of the Immaculate Conception

Project Location: Basilica of the National Shrine of the Immaculate Conception

Date of Construction/ Dedication and Use: April 16th, 2008 Address to the United States Bishops

Throne used by Pope Benedict XVI during the Apostolic visit to the United States and meeting with American Cardinals and Bishops.

St. Jude Liturgical Arts Studio was chosen to provide the chair for our Holy Father, Pope Benedict XVI, for the Apostolic Visit, specifically for use during the meeting with US Bishops held at the Basilica of the National Shrine of the Immaculate Conception in Washington DC. This custom hand-made chair reflects the momentous nature of the occasion in the high quality of the workmanship and details of its design.

It is made of American Walnut with raised hand-carved crosses on either side. Note the Papal Crest on the back. It is made in the traditional Old World style of hand-sewn embroidered needlework. In the selection of the materials and in its design this reflects the strength and warmth of the Papacy of Benedict XVI.

The chairs is now on permanent display at the National Shrine.

St Jude Liturgical Arts Studio is honored to announce that one of our most recent prestigious projects is now on display in the Museum gallery of the National Shrine of the Basilica of the Immaculate Conception in Washington DC. When we designed and built the chair and kneelers for Pope Benedict XVI for his inspiring address to the nation’s bishops in the Lower Crypt Chapel in April 2008, we did not expect we were creating a museum piece. However it is on display with many of the other historic artifacts from previous Papal visits along with many other interesting items and works of art from the Basilica’s rich history.

We invite you to visit the National Shrine Gallery to see this beautiful example of American craftsmanship in service to the Church. The chair and kneelers were made in our ecclesiastical wood working studio by our European Guild trained cabinetmakers. All these items are made of American Walnut carefully split and planed to reveal the most attractive grain. They are assembled without nails or screws using only dove tailed mitering and glued dowels. Then they are stained with many coats of a light oil finish to bring out the best of this beautiful wood. The rich white brocade and hand embroidered Papal seal of Pope Benedict XVI further enhance the aesthetic of these remarkable pieces. All these pieces reflect the warmth, strength and nobility of the papacy under Benedict XVI. 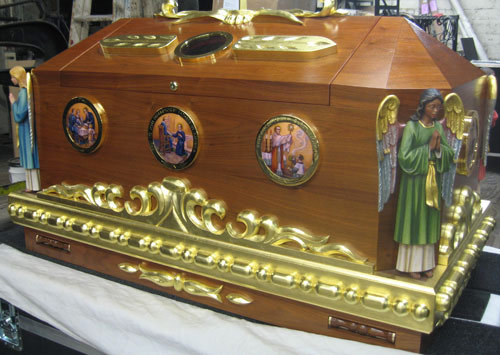 This project involved artisans from many parts of the world. We commissioned our very-own cabinetmaker from Austria, our Woodcarver from Northern Italy,our Silversmith from Spain and our goldleaf painter from Ireland.

The many cloisonné medallions that adorn this magnificent work of art tell a story of the many accomplishments of St. John Neumann.

Click here to view the videos of this magnificent work of art.

Commissioned by The Redemptorist Fathers

This box was constructed to resemble a church, so as to honor St. John Neumann as a Bishop and Builder of the local Church. During his short time as Bishop of Philadelphia, he embarked on a construction campaign that increased the number of Catholic schools in his Diocese to nearly a hundred! He was also responsible for overseeing the construction of the Cathedral Basilica of SS. Peter and Paul, establishing numerous new parishes, and introducing new religious foundations of Sisters to the Diocese! One of the designers of our Cathedral, Napoleon LeBrun, also designed St. Peter the Apostle Church at 5th and Girard Streets, which is the home of the Shrine where the body of St. John Neumann is venerated. At the mother church of the Archdiocese – the Cathedral – there is an exquisite piece of artwork — the botticcino, which covers the main altar and also the burial crypt of the former Bishops of Philadelphia. It includes four large angels in each corner.

Since St. John Neumann was one of the few former Bishops of Philadelphia not buried under this Cathedral altar and baldacchino, we thought it fitting that this reliquary box have four angels, similar to the ones on the Cathedral’s baldacchino, to acknowledge his apostolic and pastoral ministry. To honor Bishop Neumann’s ministry to immigrants, the angels on the sides of the reliquary box represent four different ethnic groups – Hispanic, African, Asian and Caucasian. These angels were intricately carved near the Oberammergau region of Germany.

The Studio where they were created also sculpted a statue of St. John Neumann, which now stands in his hometown of Prachatice in the Czech Republic. Since the motto of St. John Neumann was “Passion of Christ, Comfort Me”, it seems appropriate that these angels were carved in an area famous for its Passion Play! The pictures on the reliquary represent significant events in the life of St. John Neumann. These hand painted cloisonné enamel medallions, made in Spain, are based on some of the scenes depicted in the stained glass windows at the Shrine of St. John Neumann in Philadelphia.
In some cases, they are not exact copies of the windows, but were adapted to reflect historical realities. For example, the medallion honoring the women religious invited to the Diocese by the Saint is slightly different, to show the different religious habits of the orders. We have also included a medallion with St. John Neumann’s Coat-of-Arms, as well as one with the Coat-of-Arms of the Redemptorist Congregation. These honor St. John Neumann’s life as the fourth Bishop of Philadelphia and as a Redemptorist missionary!
To honor Bishop Neumann as the first Redemptorist to be professed in America, the first Redemptorist American Bishop, and the only male citizen to be canonized, the wood used to fabricate the box is American Walnut. The box was created by the Austrian-American craftsmen who also carved the Papal Chair used by Pope Benedict XVI during his visit to the Basilica of the National Shrine of the Immaculate Conception in Washington, DC in 2008. We hope that this magnificent reliquary box, which will travel throughout the country and the world, will be a physical extension of the St. John Neumann Shrine and allow many more of the faithful to venerate and honor this great Saint of Philadelphia! St. Jude Liturgical Arts Studio is proud to have been the designers and fabricator of the Reliquary commemorating the 200th Anniversary of the life of St. John Neumann.

Under the direction of the Rev. Alfred Bradley, C.Ss.R., St. Jude LiturgicalArts Studios created a lasting memorial that is both beautiful and educational. The Reliquary has hand painted cloisonné enamels that depict the life of St. John based on the artwork from stained glass windows. The entire wood reliquary was made by our woodcarver out of American Walnut and watched over by four Angels that were intricately carved and decorated. This Reliquary is available for your parish and/or Cathedral during this Anniversary year. During the Neumann Bicentennial Year, the Redemptorists are offering evenings of reflection on the life of St. John Neumann, which include a visit from the Saint’s traveling relic.

Contracted SJLAS to design, fabricate and install new wood furnishings (altar and pulpit) that would encompass a youthful yet faithful devotional space.