St. Jude Studio is extremely proud of its marble studios and marble work which includes the highest quality and beautiful details. Combining Old World materials with Old World craftsmanship, St. Jude can accommodate any particular style, designs and requests. Some of our work shows inlaid mosaic, as well as multi-colored, highly carved marble. We pride ourselves in our workmanship, especially in reconstructing or renovating existing sanctuaries that need to be reworked for a new liturgical area. Aligning ourselves with the many different studios in the Tuscany region of Italy, we are able to combine unique marbles with unique designs to give a final feeling and approach that is worthy of your worship space. 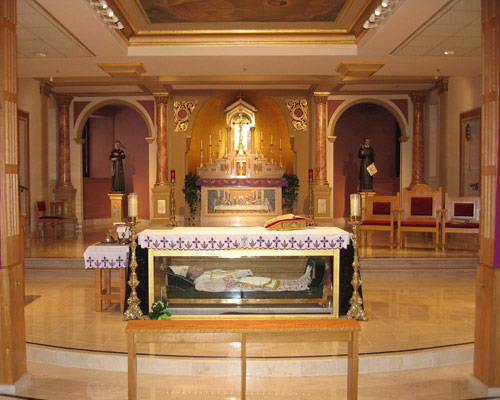 Located at the Parish of Saint Peter the Apostle

The Historic Shrine of Saint John Neumann is one of the most important Catholic Shrines in North America. The shrine underwent renovations during the 1970’s. Like many of the liturgical renovations during that time period, a look was created that favored a more contemporary design. Oftentimes, the preferred aesthetic of the 1970’s covered over, or removed completely, liturgical elements original to the re-designed church. The current leadership at the National Shrine of Saint John Neumann felt there was a pressing need to not only restore many of the shrine’s original elements, but also to highlight the importance of Saint John Neumann’s mission.

Our Liturgical Arts designers wanted to present a design that would bring new life to the shrine’s historic beauty. Our first priority was to restore the high altar, making the Eucharist the central point and focus of our design. In the new layout, the body of Saint John Neumann rests in front the Eucharist, the Source and Summit of the Church’s life…creating a dignified and befitting liturgical space. Our team would also relocate the beautiful mosaic mural of the life of Saint John Neumann to a side shrine, giving visitors a closer look at a breathtaking monument to the saint.

The challenge in designing such a church in the round was to create a central focus in the church, particularly for the Blessed Sacrament. Furnishings were chosen that best complement the space; it was done in traditional materials of carved marble and a bronze tabernacle, as well as a beautiful crucifix. The marble flooring, as well as sections of the railing were installed. The highlights of the renovation were the furnishings. The beginning of St. John’s Gospel reads: “In the beginning was the Word… and the Word was made flesh…and dwelt among us.” On each of the top mensas of the respective pieces– that is, of the altar, of the tabernacle pedestal and of the pulpit– were carved these words of St. John.

In front of the pulpit were the Latin words which translate “In the beginning was the Word”, as the pulpit is where the Word of God is proclaimed. Likewise, the phrase “and the Word was made flesh” became part of the altar. The tabernacle pedestal contained the words “and dwelt amongst us” since the tabernacle is where the Blessed Sacrament is reposed. The carvings found on the pulpit are of the four Evangelists which makes the art piece very special and unique. The marbles chosen were of earth tones to complement the wood of the pews. The pews were fabricated in a radius style by New Holland Furniture. Our craftspeople fabricated the cherry stained chairs with a wheat and grapes design carved on the back of the chairs. The Stations of the Cross were half reliefs which were colored in a traditional style.

Our Lady of Good Counsel ChurchUnder the direction of Fr. Tony D’Angelico, St. Jude Liturgical Arts Studios received a commission to design a new space to support the Blessed Sacrament shrine. The materials chosen were marble and mosaic. The mosaic background, highlighted by the beautiful shades of red and spots of gold, complemented the gold mosaic existing in the back, as well as the newly refurbished gold bronze tabernacle. The addition of the Adoring Angels, carved in our Studio in Italy, and the marble shelves and the marble structure supporting the tabernacle became a great central focus for all future liturgies.