Stained glass is another material with a rich tradition of telling a story, and at the same time, conveying a mood and feeling as well as sensitivity to any and all liturgical worship spaces. St. Jude Liturgical Arts Studio prides itself in partnering with some of the finest stained glass studios in the world.

Recent installations can be found at St. Catherine of Siena Church in McLean, VA. Under the direction of Fr. Franklyn McAfee, we designed twenty-two windows of Old and New Testament motifs and themes. These windows were as tall as twenty feet in height. The object was to illustrate and educate the people on some of the history of Catholicism, as well as to show them a traditional art style. St. Jude started with full size cartoons and drawings; once approved, they were executed by our studios in Rome, Italy. You can appreciate the hand-painted Gothic tracery and the use of traditional style of glass.

Another unique use of stained glass was accomplished at the chapel of the Franciscans T.O.R. in Loreto, PA. These windows conveyed the story of the six founders of the congregation who established the monastery in Loreto, PA. These stained glass windows were created to view the outdoor nature area and to appreciate the outdoor surroundings of the chapel. We designed a stained glass that had a neutral tint around the perimeter to be able to view the outside during each season of the year. We coordinated with the sash and safety glass in the double paned windows to give the new area its highest optimum rating for energy and heat. St. Jude uses studios both in America and abroad, depending on art style and quality of glass that would be necessary for any given project.
Click on the thumbnail to view more pictures from this project… 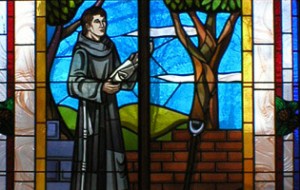 The Franciscan Friars, on the grounds of St. Francis College in Loreto, Pennsylvania built an addition to their already existing residence. They wanted to increase the residence, as well as to build a chapel that would be worthy of the initial intent of the builders and architects of the building.

The project involved using traditional materials, such as marble, mosaic and finely carved wood to mimic the new Gothic structure that was being built. The new chapel would have exposed arched carved beams and Gothic arches which would give the sense and feel of a liturgical environment worthy of prayer.

The focal point of the chapel would be the crucifix that would suspend and float in the center of the chapel. This crucifix needed to have a wall surface that would complement and at the same time, give color in the much needed sanctuary.

One day, a resident priest took a photograph of a sunset on the grounds and this sunset, which could also have been interpreted as a sunrise, would be the focal point of the backdrop to the crucifix. This particular photograph was then converted into a large 15′ x 12′ wide mosaic mural and it became the backdrop to the crucifix so that the crucifix would be seen as a piece that would be suspended in the air at the time of the Crucifixion. It has added meaning because the photograph of the sunrise was taken there on the grounds of St. Francis College.