Our Lady of Lebanon – The Maronite Chapel 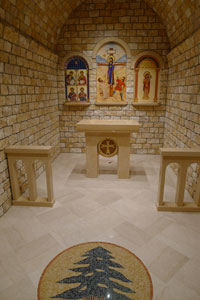 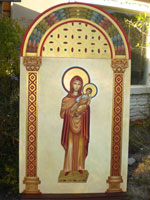 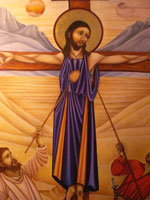 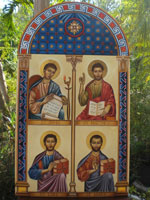 US: Maronites to Gain Presence at National Marian Shrine

WASHINGTON, D.C., MAY 31, 2011 (Zenit.org).- Construction has begun on a new Maronite Chapel at the Basilica of the National Shrine of the Immaculate Conception in Washington, D.C. The Eparchy of St. Maron of Brooklyn, who has spearheaded the project, announced that the Chapel will be named in honor of Our Lady of Lebanon.

“The Maronite Chapel will be a unique, Middle Eastern Catholic presence at the Shrine,” the Maronite Eparchy wrote in a press release. “It will also place the Maronite Church in America in the context of the Universal Church for all Shrine visitors, and appropriately recognize the rich tradition and legacy of the Maronite Church and her devotion to Our Lady.”

The Basilica of the Immaculate Conception is the preeminent Marian shrine in the United States, attracting nearly a million visitors a year.

The new chapel was designed by Master Artist Louis R. DiCocco III, the president of St. Jude Liturgical Arts Studio of Havertown, Pennsylvania, who also worked on the Chapel of Our Lady of La Vang in the national shrine.

The interior of the chapel will reflect the aesthetic of the intimate stone churches of Lebanon. A Syriac Cross will adorn the altar, as it does in many ancient churches in Syria and Lebanon, and a Cedar of Lebanon will sprawl out across the tile floor.

St. Maron and Our Lady of Lebanon flank the entrance to the Chapel. Behind the altar worshippers will see the four evangelists, the Crucifixion scene, and the Virgin and Child, taken from a 6th-century illustrated Book of the Gospels, the Rabboula.

The dedication for the new chapel is tentatively scheduled for Sept. 23, to coincide with the 50th anniversary of Our Lady of Lebanon Maronite Seminary in Washington, D.C. and the 50th priestly ordination anniversary of Chorbishop Seely Beggiani, the seminary’s rector.

The new chapel is part of a three-year project undertaken by the Eparchy of St. Maron of Brooklyn to financially support seminarians and retired priests, strengthen the missions, and renovate the eparchy’s cathedral in Brooklyn.

On May 12, Bishop Gregory Mansour of the Eparchy of Saint Maron of Brooklyn, and Chorbishop Michael G. Thomas, the Eparchy’s Vicar General and Chancellor, held a benefit dinner in Washington, D.C. with Cardinal Donald Wuerl as the featured speaker.

The Eparchy of Saint Maron of Brooklyn consists of 40 parishes and missions located in 16 states along the East Coast, as well as a seminary in Washington, D.C., a monastery for contemplative monks and a convent for religious sisters.

Some of the Finished Photos

WASHINGTON (CNS) — In a ceremony reflecting their Lebanese heritage, Maronite Catholics gathered Sept. 23 at the Basilica of the National Shrine of the Immaculate Conception for the consecration of a chapel dedicated to Our Lady of Lebanon.

“For so long, so many dreamed to have something of our own in Mary’s house,” said Bishop Gregory J. Mansour of St. Maron of Brooklyn, N.Y., who consecrated and dedicated the chapel. “I am so grateful for all those souls who made this day for Mary so beautiful.”Construction of the chapel — located near the shrine’s Memorial Hall — was spearheaded by the Eparchy of St. Maron of Brooklyn. Maronite Catholics, who are predominantly from Lebanon, take their name from St. Maron, a fifth-century Syrian hermit whose holiness and miracles attracted many followers, some of whom later brought Christianity to Lebanon.

“Here we will celebrate Mary under her special title, Our Lady of Lebanon,” Cardinal Donald W. Wuerl of Washington told the nearly 300 people who gathered for the dedication. “The devotion of the Maronite faithful to the Blessed Virgin Mary has long been recognized as a visible sign of their national identity and personal commitment to the Lord.”

With its stone interior, the chapel was designed as “a deliberate attempt to place the worshipper in the stone churches of Lebanon,” a statement from the eparchy said.

“The chapel of Our Lady of Lebanon is not only a strikingly beautiful addition to this great basilica but it is a sign of the Maronite Church’s place in the universal church. It also says something to us of pride, of hope and of the future,” Cardinal Wuerl said.

The altar includes a Syriac cross, which was common to the ancient churches of Syria and Lebanon. The floor includes a Cedar of Lebanon design. Behind the chapel’s altar is a central image of the crucifixion flanked on the right by an icon of Our Lady with the Child Jesus and flanked on the left by an icon of the four evangelists. There are also images of St. Maron and Our Lady of Lebanon.

“Here the Maronite faithful find a chapel truly reflective of their history, and their heritage and their faith,” Cardinal Wuerl said. “This chapel will stand as a constant reminder of the faith and loyalty to God” of Maronite Catholics.

Bishop Mansour consecrated the chapel with holy water, incense and chrism. In blessing the altar, Bishop Mansour prayed that it would become “a table that give life” from which God would “grant peace and forgiveness of sins to all the children of the holy church, the living and the departed.”

As he dedicated the chapel, the bishop prayed that God would “look with kindness” upon the whole church and “keep her firm on the rock of truth” and protect it from “heresy and division.”

During the ceremony, a choir intoned a Syriac chant to the Blessed Virgin Mary: “We run for protection to you. … We implore you, turn not away.”

Msgr. Walter Rossi, rector of the shine, called the Our Lady of Lebanon chapel “a truly magnificent chapel whose artwork is nothing less than spectacular.”

“One of the most ancient churchers is now represented with the newest chapel in the patronal church of the United States,” the rector said as he thanked the “many unseen hands and bodies” that worked on its completion.

Noting that “Our Lady of Lebanon is holy mother not only of the Lord of the Maronite Church but of every faithful member of the church,” Cardinal Wuerl said the chapel would “stand here as a beacon to all” and a reminder that “the Blessed Virgin Mary is a powerful, gentle woman of faith.”

He offered a prayer that those who visit the chapel would “see here the face of a loving God … and the extraordinary love of Jesus’ mother.”

The Eparchy of St. Maron of Brooklyn consists of 40 parishes and missions located in 16 states along the East Coast. It also includes a monastery for contemplative monks, a convent for religious sisters and a seminary in Washington.